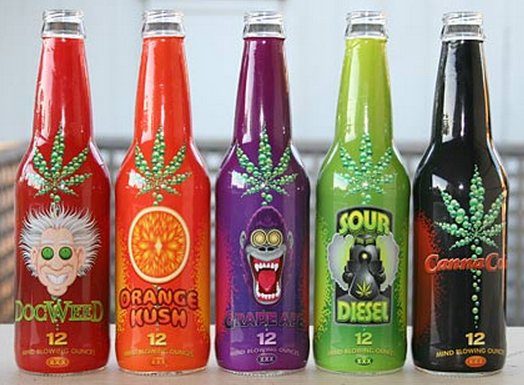 Coca-Cola once called itself “the pause that refreshes,” but a new line of marijuana sodas may be known as “the pot that refreshes.”

That’s because each 12-ounce bottle of “Canna Cola” will contain 35 to 65 milligrams of THC, the psychoactive ingredient in marijuana.

Considering that the average dose of medical marijuana is about 25 milligrams, it’s no surprise there’s quite a buzz surrounding the product, which is scheduled to debut in Colorado cannabis collectives in February and cost $10 to $15 per bottle.

The Canna Cola family of beverages (which include the Dr Pepper-like Doc Weed, the lemon-lime Sour Diesel, the grape-flavored Grape Ape and the orange-flavored Orange Kush) is the brainchild of Clay Butler, a commercial artist in Soquel, Calif.

He saw the idea of creating and marketing a marijuana soda as the perfect branding experiment.

“There are a wide range of products available in this category,” Butler told AOL News. “Sometimes, you’ll buy a cookie with just a laser-printed label that says ‘Cookie’ with no other information — you don’t know who made it!

“You won’t find that with spaghetti sauce or pharmaceuticals. I thought about creating national branding for something that is fragmented and local.”

Although Butler says he’s never smoked pot in his life, he told the Santa Cruz Sentinel that he loves branding and was intoxicated by the concept of “how Snapple or Coca-Cola or Minute Maid would make a marijuana beverage, if they ever chose to do it.”

“You look at all the marijuana products out there, and they are so mom-and-pop, hippie-dippy and rinky-dink,” he said. “If someone can put every color on the rainbow on it, they do. If they can pick the most inappropriate and unreadable fonts, they will. And there’s marijuana leaves on everything. It’s a horrible cliché in the industry.”

Although Canna Cola does include marijuana leaves in the logo, Butler believes his rendition — a leaf made of bubbles to suggest soda pop — is way more buzz worthy than those of competitors.The sodas are supposedly more tasteful as well, according to Scott Riddell, the founder of Diavolo Brands, which is marketing Canna Cola.He says the levels of THC in his line of soft drinks will be substantially below the levels of many drinks now on the market and likens his product to a “light beer” alongside high-proof liquors.

“It’s got a mild marijuana taste,” Riddell said. “But the taste factor is really negligible compared to some competitors with three times the THC. When you get to that level, you really have a heavy aftertaste.”

The product will be licensed to local companies in states that allow medical dispensaries.

“We will sell the bottles, the labels and THC-free versions of the soda to local manufacturers, and they will be responsible for making the sodas,” Butler said. “That’s why the price of purchases varies.”

If all goes well, Butler says all 50 states will eventually allow medical marijuana, and this will make Canna Cola attractive to a giant conglomerate like a Coke or a Pepsi, who would rather buy up an existing brand than reinvent the wheel, or the weed.

So far, the reaction from the cannabis community is positive from folks like Jordan Radach, who is an assistant manager at the Dank Bank, a San Diego-based collective, and approves of Butler’s branding philosophy.

“I like how they are not marketing in the hippie-dippy way,” Radach told AOL News. “Too many companies do that at the expense of the medicinal aspect.”

He also approves of the lower THC count.

“There are other cannabis sodas around, but they have higher THC counts, and a heavy after-taste. Basically, they taste like crap,” he said. “Like weed in a bottle.”

Radach, 21, predicts there will be a demand for the pot-enhanced pop if they taste good.

“A lot of medical marijuana patients in San Diego are younger and, for them, we sell a variety of cannabis Kool-Aids that do really well.”

On the other hand, Steve Bloom, who runs CelebStoner.com, isn’t holding his breath that the product will reach the heights of success that Butler desires.

“I think this is a great idea, but it only matters to people who live in the states with dispensaries,” Bloom said. “That’s Colorado, California and maybe Montana. It can’t go nationwide because pot is illegal and probably will be for a while. If it didn’t pass in California, it won’t in other states.”