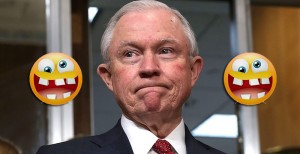 Jeff Sessions basically told Congress that if they don’t like the marijuana laws that are on the books, they need to get off their butts and change them. As an executive official, he’s telling the legislative branch that he’s going to respect the constitutional separation of powers, which means that if the law is changed it will have to be changed by the lawmakers.

As reported in Politico, Sessions’ action may make the legalization of marijuana more likely, as a lot of legislators who have been trying to have it both ways are forced to take a position. Sen. Patrick Leahy, D-Vt., for example, who refused to discuss his position on marijuana legalization with Politico “just a few weeks ago,” is now pledging to fight for legalization.

And he’s not alone. Marijuana means jobs and tax revenues in many states, and if the Justice Department won’t promise to ignore the federal law, there will be a lot of pressure on Congress to change the law.

And that’s exactly how the system is supposed to work. Members of Congress would rather have it both ways, of course, because they’re politicians and talking out of both sides of their mouths is standard procedure. But we get better government when people have to take a stand, and face the voters. Looks like that’s going to happen here, for which we can thank Attorney General Sessions.