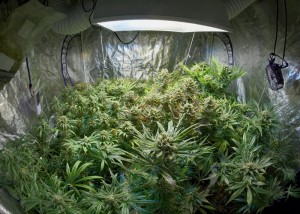 Legal marijuana use for people with certain diseases moved a step closer to becoming state law Wednesday, when the House of Representatives approved the measure after more than seven hours of debate. The bill would allow a doctor to prescribe marijuana for medical reasons for people with a handful of conditions including HIV and AIDS, Parkinson’s disease, multiple sclerosis, epilepsy, Crohn’s disease, and post-traumatic stress disorder. Pharmacists would be allowed to distribute the drug, which they’d get from state-licensed growers.

The House passed the bill in a 96-51 vote that loosely followed party lines. The measure now goes to the state Senate. Gov. Dannel P. Malloy, a Democrat, said Wednesday he would sign the bill if it reaches his desk. Malloy last year proposed a medical marijuana bill that failed to pass the legislature. But he signed into law another bill that reduced the penalty for possessing small amounts of the drug to a ticket-issuing offense. A medical marijuana law cleared the legislature in 2007 but was vetoed by then-Gov. M. Jodi Rell, a Republican.

Several area lawmakers who opposed the bill then said they support the new version because it offers more state oversight. Supporters of the bill said it’s needed help to those who are suffering and in pain. Opponents said it flies in the face of state law and sends the wrong message about marijuana. Rep. Penny Bacchiochi, R-Somers, is one of the bill’s biggest supporters. She’s often told the story of how a doctor recommended that her former husband, who died of cancer, try marijuana to help his pain and improve his appetite. Bacchiochi helped him get the drug, and says it improved his quality of life. But this year Bacchiochi told the stories of people who testified before the legislature’s Judiciary Committee on the bill. She mentioned a former lobbyist who suffers from Parkinson’s disease, as well as a woman who suffered terrible side effects from a legal drug she described as stronger than heroin that was prescribed to treat Crohn’s disease. Bacchiochi told her colleagues that the decision for her is about compassion. “I will be voting with my heart,” she said. Others argued against the bill because it conflicts with federal law.

They pointed to a letter written last week by U.S. Attorney David B. Fein that says marijuana is still illegal as a federal drug. While the federal government doesn’t focus its resources on sick people who use marijuana as a medical treatment in compliance with state law, Fein’s letter said, it could if it wanted to. And Fein wrote that the bill would “create a licensing scheme that appears to permit large-scale marijuana cultivation and distribution, which would authorize conduct contrary to federal law and undermine the federal government’s efforts to regulate the possession, manufacturing, and trafficking of controlled substances.” Fein went on to say that the federal government could crack down on growers and dispensaries, even if they’re licensed by the state.

House Minority Leader Lawrence F. Cafero Jr., R-Norwalk, opposed the measure, saying it flew in the face of federal law. “They should be having this debate in Washington D.C.,” he said. And he criticized the bill for leaving new policies and regulations up to the state’s Department of Consumer Protection. The bill would limit the amount of marijuana being dispensed to a one-month supply. “I’m not so sure there’s an official marijuana expert out there, so I have to believe that the patient would have a large part in dictating what a month’s supply would be,” Cafero said. North-central Connecticut lawmakers were split on the bill. Rep. Henry J. Genga, D-East Hartford, opposed it.

He also voted no in 2007. “It’s still a federal crime,” Genga said. “And I don’t support the theory behind it because I think there are other methods,” he added, referring to other drugs. Rep. Claire L. Janowski, D-Vernon, voted to allow medical marijuana, although she opposed the 2007 bill. “That was the worst bill I ever reviewed in the history of bills in the legislature,” Janowski said of the earlier legislation, which would have required patients to grow their own marijuana plants without saying how they would get seeds or how they would dispose of the extra product. Janowski supported the state oversight in the bill that passed the House on Wednesday. “There’s just a lot more regulations involved,” she said. “It’s a much more targeted bill, and we also have the opportunity to see how it works and make adjustments as necessary.”

But Janowski said she still had misgivings about whether the bill would cause problems for police officers who would have to decide whether a person had the drug legally. Rep. Peggy Sayers, D-Windsor Locks also voted yes Wednesday despite opposing the 2007 bill.

The new measure, she said, has “enough controls in place that it was worth giving it a try.” Rep. William Aman, R-South Windsor, also supported the bill. He said the people who need the drug the most should have access to it. Rep. Timothy J. Ackert, R-Coventry, had similar logic. “If somebody is in need of some relief and this is their answer to it, I essentially want them to have the best quality of life they can have with their ailment,” he said. The measure would limit prescriptions to people age 18 and older. It also would limit where they could smoke or otherwise consume the drug: not in a moving vehicle, at work, on school or college grounds, or on public property.