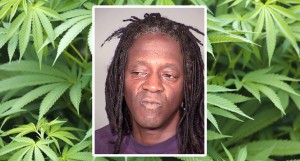 Rapper Flavor Flav was arrested on suspicion of driving under the influence and possession of marijuana in Las Vegas, Nevada on Thursday, NBC News reports.

Flav was pulled over for speeding, and was found with marijuana, as well as an open container of alcohol, a Nevada state trooper told NBC.

The rapper, 56, was reportedly traveling 73 miles per hour in a 45-mile-per-hour zone on Interstate 15 when he was pulled over, said Nevada Highway Patrol spokesman Trooper Loy Hixson.

Flavor Flav originally broke onto the music scene in the 1980s with group Public Enemy, and had a resurgence in fame after joining the cast of the third season of VH1’s The Surreal Life in 2004.