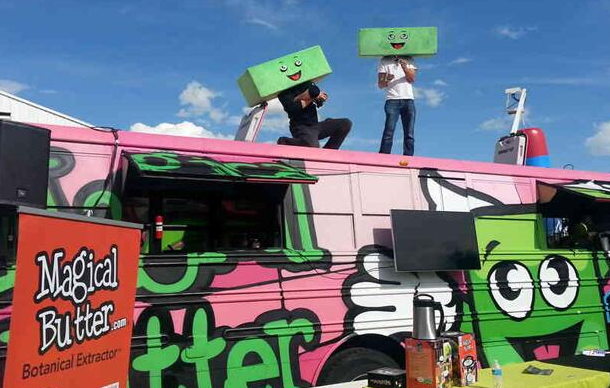 A food truck starts selling weed-infused meals openly in Washington for the first time after a vote in favor of recreational marijuana legalization in 2012.

Food company MagicalButter is taking the “Samich” truck across US cities where marijuana is now legal, and its journey began in April in Denver. “Samich”, the company says, stands for “Savory Accessible Marijuana Infused Culinary Happiness.”

The process of infusion is achieved using an automatic botanical extractor often used to make cannabutter and canna-oil. The device can take nutrients from plants and produce butters, oils, and tinctures.

On the menu, are barbecue and pulled pork filled sandwiches, in addition to a turkey and stuffing option served on cornbread. The latter is known as the “Danks-giving.”

The truck’s signature “Samich” sandwich consists of nut butter, jelly, and banana. The jelly is a “trinity jam” made with blueberries, raspberries, and pomegranates, MagicalButter enthused.

Also on the list is truffle popcorn with ganja – Indian marijuana.

MagicalButter pledges that each product will be packed with between30 and 100 milligrams of THC, cannabis’ main psychoactive element. This constitutes a healthy daily dose, according to Medical Jane, the marijuana enthusiasts’ site.

The state of Washington voted to legalize cannabis back in 2012, but has since put off the process of issuing licenses to retailers. Licenses for the first 20 RM retail stores in Washington State are to be issued in July.

Reportedly, the truck’s services can now only be used by people who hold medical marijuana use cards.

Washington and Colorado states are currently the only 2 states with laws supporting legal recreational marijuana use. Medical marijuana use is much more widespread, with New York set to join 22 states, along with the District of Columbia, to legalize usage of cannabis in some form.