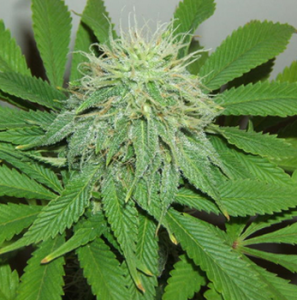 Candy Cane Brain can be cultivated compactly as a single branch sea of green or will also lend itself to multi-branching, where each branch becomes a site for nice tight buds with minimal foliage. A few weeks into building, Candy Cane Brain often elongates and will need to be staked by week 3 or 4. At maturity, crystals coat even the large fan leaves of Candy Cane Brain, giving off an aroma so sweet that it can tempt the lightweight or occasional toker.

Saome flavor-bred pot tastes as if wine or fruit juice had splashed its foliage and then dried, bringing forward the fruit sugars. For Candy Cane Brain, its a splash of bery and citrus over savory skunk. The breeders say that first-time smokers of Candy Cane brain may find themselves rolling an extra joint simply for the taste. The high is giddy and disorienting, with a certain degree of brain freeze at onset. However, once you get back into the pace of the conversation, Candy Cane Brain is a good social catalyst for parties and other fun situations.

Ever smoke or grow Candy Cane Brain? Tell us about it in a comment below!