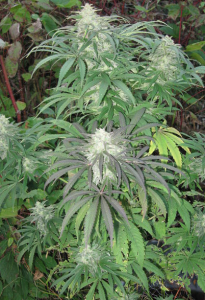 Through the 1900s, Switzerland seemed to be on the verge of a progressive marijuana policy, indeed of becoming the next pot spot. KC Brains was among several growers who bred Swiss seeds in anticipation of a more liberal legal climate. Edelweiss is a distinctive Swiss strain that emerged in this period, based on a Swiss indica with a strong local reputation. Unfortunately, the Swiss government retreated from looser cannabis laws and began to crack down on pot culture, especially if it was “imported”. Many growers who had tested Switzerland’s evolving pot policies were charged as criminals or shown to the border.

KC Brains brought Edelweiss with him back to Holland, where he combined it with KC 606 and a Brazilian strain seasoned with sativa from South Ecuador. The result is a fresh lemon weed whose buzz feels more “high” than “stoned”. The Brains Escape pattern of growth is decidedly indica, delivering big plants with incredibly wide, dark, fat leaves. This strain’s long growing season rewards outdoor growers who vegetate starter plants indoors or in a greenhouse, and then transplant outside to flower for 9-12 weeks before the frost starts.

This is an enjoyable tasting weed to share with friends. it goes well with playing in the park, going on a hike, or seeing outdoor music shows. A complimentary weed for summer, Brains Escape can also bring back that summer feeling during any season of the year.

Ever smoke or grow Brains Escape? Tell us about it in a comment below!