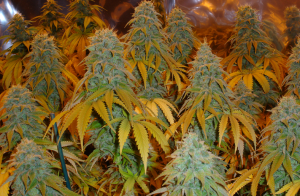 After nearly 13 years in business, a San Pablo Avenue medical marijuana dispensary in Berkeley was set to close Monday evening under pressure from the federal government for being too close to two schools.

The 9,000 member Berkeley Patients Group has not yet found a suitable new location in Berkeley and plans to open a delivery service, dispensary management said Monday. Sixty nine employees of the dispensary will be out of work come Tuesday, but they will be paid through the end of the month.

“There’s a lot to take into account in trying to follow state and local laws in finding a place,” said Sean Luse, chief operating officer, as customers streamed in to the dispensary on its last day. “There’s a lot of fear out there in the community and that’s part of the challenge. We’re keeping our fingers crossed.”

The dispensary at 2747 San Pablo Ave. is across the street from a school called the Center for Early Intervention on Deafness and three blocks from a second school called Ecole Billingue de Berkeley. City and state laws require dispensaries to be at least 600 feet from any school. The dispensary was established before city guidelines on proximity to schools were put into law.

Luse said Berkeley Patients Group signed an agreement with building owner David Mayeri to vacate the current location May 1. That agreement was overseen by an Alameda County judge with the U.S. Attorney’s Office in San Francisco looking on, Luse said.

Goldsberry, who helped found Berkeley Patients Group but is no longer involved, and who now is a consultant to dispensaries, said the current federal pressure under President Barack Obama is the worst it’s been since former California Attorney General Dan Lungren went after dispensaries in the late 1990s.

“This is the most difficult period that we’ve ever faced because we can seethe end of prohibition,” Goldsberry said. “The department of justice wants to unsettle us, but for most of us it just reinvigorates the fight. We’re fighting a war on drugs.”

Goldsberry said she thinks the medical marijuana movement will emerge stronger from the latest crackdown because people in the industry have learned better business practices and “are more focused on politics and social justice issues than ever before.”

Mary Davis, 60, of Berkeley, was at the dispensary Monday and is sad to see it close its doors.

“Berkeley Patients Group is like family to us,” said Davis, a nurse who uses marijuana to combat the constant pain that comes with severe osteoarthritis in both her knees. “So many of us need it to get by day to day and to just start our day. It’s going to be really hard for all of us.”