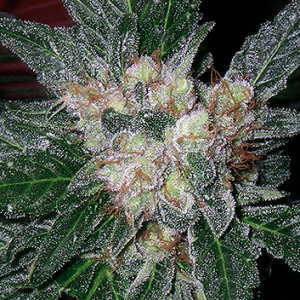 Barneys Farm Violator Kush Feminized is a mostly indica cross of a Hindy Kush and Malana, originated in the Malana Nala, a side valley of the Parvati Region. Violator Kush is characterized by heavy crops of quality marijuana with a very high THC content.

Domination of indica genes make feminized seeds ofViolator Kush cope well with mild stress and some diseases. Her cannabis seeds have a good rate of germination of at least 80%. Fully developed plants are short (app. 70-80 cm) and bushy with large green leaves. They produce buds of such a density that tying or staking is necessary. Violater Kush plants look like touched by the first frost, totally covered with white shiny hair and with glittering pearls of sticky buds full of trichomes. THC content is said to be as high as 22%.

Flowering period of this cannabis variety is 8-9 weeks which is typical for any indica dominated strains. Already at the beginning of flowering, Violator Kush develops an earthy, musty smell and flavour which becomes more intense during maturing. This strain is suitable for indoor and outdoor cultivation. Outside harvest starts at the end of September in Northern Hemisphere. Being a great yielder, Violater Kush produces about 150 gr. per m2 when grown indoors and the same amount per outside plant. The final product of this marijuana contains 1.5 % of CBD and produce a comfy couch-lock stoned effect. 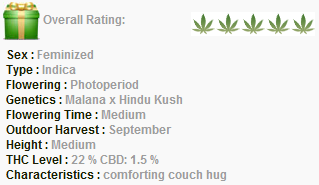 Have you grown or smoked Barneys Farm Violator Kush? Tell us about it below!