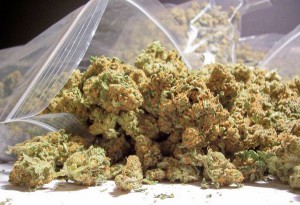 Here are the nine states least likely to legalize it anytime soon and, after that, a few brief notes on a handful of states that some would think should be on the list, but might surprise us.

1. Alabama. This Heart of Dixie state still has several dry counties and about a third of the counties in the state are either partially dry or have localities that are dry. Although Democrats hold some local offices, Republicans dominate state elected offices and the state legislature.  The state has no initiative process, and the legislature has so far failed to pass even medical marijuana legislation.

2. Idaho.  This heavily Mormon-influenced state has the initiative process, but so far even campaigners for medical marijuana haven’t been able to qualify a measure for the ballot, so it’s hard to see how they could get a legalization initiative on the ballot, let alone pass it. An Idaho Politics Weekly poll from February shows what an uphill battle it is. Only 33% of respondents favored legalization, with 64% opposed (and 53% “strongly” opposed). And the conservative Republican legislature is more concerned with fending off sharia law than legalizing pot, although it did manage to pass one of those no-THC, high-CBD cannabis oil bills this year.

3. Kansas.  Another state dominated by Republicans, with no initiative process, and little popular support for legalization, anyway. An October 2014 poll showed only 31% in favor of legalization and, distressingly, an ever larger percentage (33%) saying marijuana possession should be a felony. While voters in Wichita this week approved a municipal initiative decriminalizing pot, the state attorney general has already asked the state Supreme Court to overturn it. Kansas is another one of those states where the legacy of alcohol prohibition lingers, too: Almost all of its counties are either dry or semi-dry. Be glad you’re not in Kansas anymore, Dorothy.

4. Louisiana.The state has some of the country’s harshest marijuana laws, including up to 20 years in prison for repeat possession offenders and up to life in prison for pot possession if the person has a previous felony. Efforts have been afoot in the state legislature for several years to fix those draconian laws, but have so far gone nowhere. An October 2014 poll showed roughly two-thirds supported fixing those laws, but that hasn’t yet influenced Baton Rouge. Tellingly, the poll didn’t even ask whether respondents supported legalization. And there is no initiative process, anyway. In Louisiana, not sending people to life for pot would be progress.

5. North Dakota.  At the top of that geographical tier of Great Plains states destined to be a bastion of reaction on marijuana legalization, the agricultural state has approved industrial hemp production (in part because North Dakota farmers can see their Canadian counterparts just across the border profiting from it), but is unwilling to move even on medical marijuana, let alone legalization. The legislature this year killed a bill to even study legalizing medical, and an effort last year to put a medical marijuana initiative on the ballot couldn’t manage to qualify. An October 2014 poll found that even medical marijuana couldn’t get majority support (47%), and the prospects for legalization were even grimmer. Only 24% supported legalization, with 68% opposed.

6. Oklahoma.  Good luck. The state government is dominated by Republicans and is one of the most conservative in the country. The state has the initiative process and state Sen. Connie Johnson (D-Oklahoma City) is likely to try again to get it on the ballot next year, but even if it were to make the ballot, it would likely get creamed. A poll this month found only 31% for legalization. This is also one of those states where alcohol prohibition still lives on; about a third of the state’s counties are completely dry.

7. South Carolina.There is no initiative process here, so it will be up to the legislature, which is controlled by Republicans. The legislature passed a no-THC, high-CBD cannabis oil last year, and Republican lawmakers have introduced medical marijuana and decriminalization bills this year, but they have yet to pass. The Palmetto Politics Poll last July barely had majority support for medical marijuana (53%), and didn’t even bother to ask about legalization.

8. South Dakota.The state has the initiative process, but it also has the dubious distinction of being the only state to twice defeat medical marijuana at the polls. The Republican-controlled legislature has repeatedly refused to act on medical marijuana bills and didn’t even consider any marijuana reform bills this year. There is no recent polling on support for legalization, and given the performance of medical marijuana initiatives, even if a legalization initiative were to qualify for the ballot, it would get crushed.

9. Utah.The Mormon heartland, another state where Republicans dominate the legislature and the executive branch, and another state where the only legislative concession to pot law reform has been the passage of a no-THC, high-CBD cannabis oil bill. A March poll found 72% of Utahns supported medical marijuana, but that didn’t stop the legislature from quickly killing a medical marijuana bill this year. That poll didn’t ask about legalization; the last one that did, from 2013, was not encouraging: It had 57% opposed to legalization. Utah has the initiative process, but that won’t be much good until Utahns get on board with legalization.

Why Some States Didn’t Make the Bottom 9

There are several states that some might have expected to see on this list, but who I think may surprise us and come around more quickly.

In the South and Mid-South, Mississippi and Arkansas would seem like good candidates to be among the last to legalize, but both states have the initiative process and some associated activism around it. They still have to get public opinion on their side, but they can circumvent sclerotic legislatures once they do. And there is hope that demographic trends will turn Georgia, of all the Deep South states, into a place where pot can be legalized at the state house before the bitter end.

On the Great Plains, Nebraska is the only state from Texas to Canada that didn’t make the bottom nine. It’s certainly as solidly conservative as the others and it just hates legalization next door in Colorado, but this is a state that decriminalized weed nearly 40 years ago. Perhaps one of these days, Cornhuskers will wake up and remember that.

In the Intermountain West, Montana and Wyoming share many of the same political and cultural characteristics as Idaho and Utah, but the influence of the Mormon Church isn’t nearly as strong. Montana has the initiative process and has used it to approve medical marijuana, only to see that rolled back by Republicans and Christian conservatives. Wyoming also has the initiative process. In both states it will be a struggle between deeply rooted Western individualistic libertarian notions and equally deeply rooted Christian conservativism, but they won’t necessarily have to wait on state legislatures.